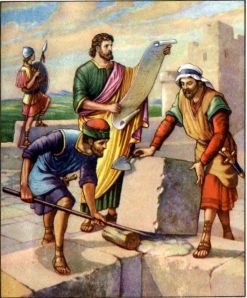 The books of Ezra and Nehemiah tell a series of odd – and I would argue unsettling – stories about the Jews when they return from exile and resettle Jerusalem.

In Ezra 4, as the returnees begin rebuilding the temple, the current residents of the land ask them if they can help.

When the enemies of Judah and Benjamin heard that the returned exiles were building a temple for the LORD, the God of Israel, they came to Zerubbabel and the heads of the families and said to them, “Let’s build with you, for we worship your God as you do, and we’ve been sacrificing to him ever since the days of Assyria’s King Esarhaddon, who brought us here.”

But Zerubbabel, Jeshua, and the rest of the heads of the families in Israel replied, “You’ll have no part with us in building a house for our God. We alone will build because the LORD, the God of Israel, and Persia’s King Cyrus commanded us.”

Who are “the enemies of Judah and Benjamin”? Well, for one thing, many of them are Jews! Or, rather, their parents and grandparents were Jews who were too poor to be worth anything to Babylon when Nebuchadnezzar razes Jerusalem and exiled the aristocracy.

They are also, as the text indicates, residents of the land formerly occupied by the northern kingdom. The reference to “Assyria’s King Esarhaddon” having brought them is a reference to the Assyrian policy of not only decimating and exiling a nation but transplanting exiles from other parts of their empire to live in that area, thus removing any regional affiliations or alliances that could threaten the empire. Those exiles then intermarried with the poorer Jews left in the land, and the resulting mixed-race northerners were known as Samaritans.

So Ezra 4 gives us the opening salvo in the centuries-long stigmatization of Samaritans, a stigmatization Jesus himself disregards and, in so doing, implicitly rejects. Which should lead us to ask: Did God actually approve of what Ezra and the returning exiles did in excluding the people of the land?

Certainly the text thinks so. Ezra and Nehemiah are written from the perspective of the Jews returning to Palestine, and Nehemiah purports to be autobiographical in nature; it is indeed highly sympathetic to similar words and actions from him. For example, Nehemiah 2:

“Let’s start rebuilding!” [the Jewish officials] said, and they eagerly began the work.

But when Sanballat the Horonite, Tobiah the Ammonite official, and Geshem the Arab heard about it, they mocked and made fun of us. “What are you doing?” they asked. “Are you rebelling against the king?”

“The God of heaven will give us success!” I replied. “As God’s servants, we will start building. But you will have no share, right, or claim in Jerusalem.”

Notice first how Nehemiah does not deign to actually answer the completely legitimate question, but instead frames the discussion in terms of who’s in and who’s out, seemingly out of nowhere rejecting an unsought claim over Jerusalem.

In fact, Nehemiah is all about drawing boundaries. In chapter 13, he sees “Jews who had married women of Ashdod, Ammon and Moab,” and “half of their children” could no longer speak Hebrew.

So I scolded them and cursed them, and beat some of them, and pulled out their hair. I also made them swear a solemn pledge in the name of God, saying, “You won’t give your daughters to their sons in marriage, or take their daughters in marriage for your sons or yourselves. Didn’t Israel’s King Solomon sin on account of such women? Among the many nations there was no king like him. He was well loved by his God, and God made him king over all Israel. Yet foreign wives led even him into sin! Should we then listen to you and do all this great evil, acting unfaithfully toward our God by marrying foreign women?”

Likewise, Ezra 9-10 tells how Ezra led the people to separate from their foreign wives.

Then Ezra the priest stood up and said to them, “You have been unfaithful by marrying foreign women and adding to Israel’s guilt. But now, make a confession to the Lord God of your ancestors and do his will. Separate yourselves from the neighboring peoples and from the foreign wives.” … They promised to send their wives away, and their compensation offering was a ram of the flock for their guilt.

In 10:44, after listing all the men who had married foreign wives, the book ends with this line: “All these men had married foreign women, some of whom had borne children.” The footnote indicates the final clause is uncertain in Hebrew, and that the apocryphal 1 Esdras has the same phrase, which is interpreted: “… they sent them away with their children.”

The injunction against marrying foreign wives is often expressed in Solomonic terms, but its emphasis in the Bible appears mostly in texts dating to the return from exile, when maintaining the bloodlines of Judaism became of primary importance. Notice how there isn’t any discussion in Ezra of these wives leading them into adultery, as we find in other places, including in the Solomon story itself. Rather, foreign intermarriage in itself is problematic, to the point that God is portrayed as demanding the destruction of marriages and possibly the removal even of children from their fathers, a pretty abhorrent idea, frankly.

This is something of a contradiction to other parts of the Old Testament, where foreigners are treated much differently.

Ruth, for example, is a Moabite woman who marries a Jewish man and becomes the great-grandmother of King David himself, a fact seemingly unknown to Ezra and Nehemiah. Jonah, much to his chagrin, is called to evangelize the Assyrians, who are described not only as repenting but as deserving of just as much of God’s care and attention as the Israelites. In Micah 9:7, God indicates he has led the Philistines and Arameans in much the same way as he led the Israelites.

Likewise, foreign intermarriage wasn’t considered a problem for Joseph or Moses or Jacob (whose wife Rachel, you might recall, worshipped idols and took them with her when they left her father, Laban).

In a 2010 article for the Scandinavian Journal of the Old Testament, Jeremiah W. Cataldo, a history professor at Grand Valley State University, argues Ezra and Nehemiah are reflections of an effort by returning Jews to establish a theocratic utopia.

The immigrants did not control the social-economic base … [ so they] tenaciously inscribed a new cultural narrative. It was an ideological attempt to bring real change to the social context by encoding structural components of theocracy within the dominant culture. … They scratched their “histories” into the soils of the land through religious tradition, sweeping the clutter of the am ha’aretz [the native residents] out of divine favor and out of right to land.

Cataldo describes this behavior as “ethnocide.”

It is found especially in Ezra-Nehemiah in the rejection of the peoples already in the land, in reducing them, cultural complexity and a previously shared ethnic identity and all, to the pejorative “foreign” or “profane.”

Let’s face it: This sounds more like the modern-day Republican Party than God.

Nevertheless, it can be seen in Nehemiah 4, in which the text assumes “Jews” means only the new arrivals, and that everyone else are “enemies.” The texts ascribe to God the qualities the authors needed to strengthen their grip on the land.

Ezra-Nehemiah in particular is consumed with maintaining the social-religious distinction between member and non-member, golah and am ha’aretz. It is consumed with establishing lines of division. … They describe a token amount of foreigners to reject so as to demonstrate the community’s commitment to religious obedience. What the texts have done, in other words, is wipe the narrative slate clean in order to reconstruct a society that was founded upon a religious institution defined by the golah community.

In the end, Cataldo argues, this notion helped preserve Judaism. By redefining Jewishness as apart from any social and  political context, instead focusing on the religious aspects of their culture, they were able to retain an identity despite political upheaval and domination in the ensuing centuries.

Nevertheless, the actions described in the text – regardless of whether they are historically true or not – would seem to indicate a pattern of exclusion and bigotry contradicted not only by the teachings of Christ himself but also other parts of the Hebrew Bible.

Indeed, I would argue we see a conversation throughout the Old Testament between more universalistic authors and more nationalistic ones. Thus we have texts like Jonah, Ruth and certain stories in the Pentateuch – in which foreigners and non-Jews are described as receiving divine commands, saving the Israelites or otherwise playing positive roles in the story of God’s people – alongside texts like Joshua, Ezra and Nehemiah, in which foreign intermarriage is decried and the “people of the land” are universally designated for separation or destruction.

Both sides of this conversation cannot be right, which means that at least some of these passages, especially when read in isolation, must be painting an inaccurate picture of God.

This doesn’t mean they are useless or should be ignored, but it means we should be leery about accepting them at face value. Rather, we should seek instead to use them in the context of what we know is accurate about God and his desire for all people.

I’ll try to return to our discussion of genocide in Part 4.

3 thoughts on “What the Bible Gets Wrong … About God? Part 3”