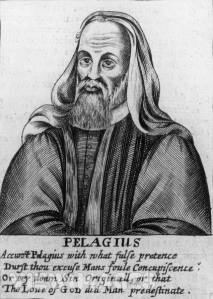 We all know St. Augustine of Hippo, the theological genius of the fourth and fifth centuries who influenced the medieval church more than any other bishop and continues to have significant influence today – particularly thanks to what I would say is the toxic doctrine of original sin, which has warped our view of human nature and sexuality so that we think of these things negatively rather than positively.

We don’t know as much about the people who opposed Augustine’s beliefs, those ill-fated objectors who raised objections to the doctrines he formulated. One of those was Julian of Eclanum, a southern Italian bishop who was deposed and excommunicated because he refused to sign Pope Zosimus’ edict against Pelagius. Julian was a second-generation Pelagian, the group against whom Augustine fought often in his career. Pelagians held an exalted view of human nature and held strongly to the notion of free will, contra Augustine’s leanings toward predestination, but did so to such an extent that they thought humans capable of achieving perfection in this life.

So of course these battles, as they often do, came down to two sides advocating the extremes of an issue, the one with a decidedly pessimistic view of humanity and its sexual proclivities, the other a decidedly optimistic, if not naive, view of the same.

Yet when we look at what Julian wrote – such as we know it, mostly through Augustine’s rebuttals – it’s hard not to get the sense that he was quite well ahead of his time, by about 1,500 years or so.

In “Generation, Degeneration, Regeneration: Original Sin and the Conception  of Jesus in the Polemic between Augustine and Julian of Eclanum” (Chapter 1 in the book Generation and Degeneration: Tropes of Reproduction in Literature and History from Antiquity through Early Modern Europe, edited by Valerie Finucci and Kevin Brownlee, Duke University Press, 2001), Elizabeth A. Clark details the dispute, which began about 419 C.E.

The first thing Julian attacks is Augustine’s notion that lust is necessarily sinful, and that had they remained sinless, Adam and Eve would have had sex in the Garden of Eden, but it would have been a purely intellectual process, no different than moving one’s arm to reach an item out of reach. By contrast, Julian shied away from Augustine’s use of “concupiscence” to describe human lust and instead used phrases like “the natural appetite” or “the vigor of the members.”

For Julian, in contrast lust – or natural appetite – is simply one of the bodily senses that we are given as part of our human endowment; hence, we cannot believe that it originated from human sinfulness. Against Augustine’s view that all human nature was ever after changed by Adam’s sin, Julian argues that human nature (including sexual appetite) does not change, since God bestows our essential human constitution and neither sin nor grace has the power to alter it. Augustine’s list of the penalties for sin derived from Genesis 3 – labor pains, sweat work, the submission of women to men – are, in Julian’s view, all part of the natural order and thus unchangeable. Although Julian believes that an “excess” of lust leading humans to intemperate fornication is blameworthy, sexual desire of a “moderate” sort is one of God’s good creations. (26-27)

Julian’s views on lust certainly more reflect our time than his own; his views on the inheritance of sin also seem better suited to a more modernist time. He catches Augustine’s belief in the genetic passage of sin from parents to children in a trap, according to Clark: “If [baptized] parents no longer have a property (namely, sin) they can’t transmit it; if on the other hand, they do transmit it to their children, as Augustine holds, they must never have lost it (through regenerating baptism).”

Likewise, Julian contested Augustine’s argument that human lust is inherently shameful, as evidenced by the universal need for clothing and the desire for those having sex to do so in private.

For Julian, the use of clothing was not related to sin’s entrance to the world and the desire to cover unruly genitals, as Augustine would have it. Rather, clothing was simply an aspect of “human inventiveness” that the first couple developed over time. Besides, Julian argues, even today we do not shun nudity in some circumstances: We don’t blame artisans, athletes or sailors (witness Peter in John 21:7) for their state of undress since their activities require it. Moreover, Scots and other barbarians go naked without shame. Augustine’s teaching that universal shame accompanies nudity is “destroyed” by such evidence, Julian asserts: Augustine has tried to universalize the sensation of shame whose manifestations are in truth culturally conditioned. (29-30)

Julian’s appeal to science and anthropology to counter Augustine’s theology are certainly well ahead of his time, though as Clark points out, he also appeals to theological concerns, as well, including the cogent point that original sin calls into question God’s power and goodness: “How could a powerful and benevolent deity allow ‘in the womb of a baptized woman, whose body is the temple of God,; to be formed a child under the power of the devil?” (30)

This discussion of the nature of sin and its passage from one generation to the next leads naturally to the question of Jesus’ own birth and sinless nature.

Here I’ll bring in another article: Philip L. Barclift’s “In Controversy with Saint Augustin: Julian of Eclanum on the Nature of Sin,” which appeared in a French journal of ancient and medieval theology back in 1991.

Barclift points out that Julian saw all of human nature as inherently good because it comes from – is created by – an immutably good God. In this way, Julian, likely unknowingly, is following in the footsteps of Gregory of Nyssa, for whom the goodness of God was paramount.

Julian begins: Since all of nature is the work of God the Creator, who is the necessary precondition of all things, it must be good. Moreover, that which is natural is the necessary source of what follows it. So, he reasons, because so much is dependent on nature, the natural order must be immutable, and because of God it must be immutably good; for its essential goodness reflects on its Creator. (6-7)

This ultimately leads Julian to unrealistic views of humanity’s ability to achieve perfection, but the starting place is radically different from Augustine’s bleak view, and it’s why Julian sees sexuality and lust as inherently good, not evil, although he certainly believes they can be used wrongly, as any good thing can.

Augustine’s more negative views on sexuality – which included sex as the means by which sin is transmitted from one generation to the next – have implications for his christology, and this becomes a big topic of debate between him and Julian. For Augustine, the virgin birth is absolutely necessary; because he assumes the male seed alone plays any part in forming the baby, the absence of seed from Joseph explains why Jesus did not inherit humanity’s sinful nature.

Julian rejects this completely, and again, it’s striking how well ahead of his time he is here. Augustine’s views come from the highly respected and influential Greek medical writers Galen and Soranus, who both taught the dominance of the male seed in the process of conception. Julian instead argues for a more egalitarian conception process, by which both parents pass on their traits to their children.

If Adam’s sin is passed on genetically and not merely as a byproduct of sexual heat, Julian reasons, Mary’s virginity could not have preserved Jesus from the sin in her genes. Julian insists that Jesus shared in her human nature, for he was truly a man, “born of a woman, born under the law” (Gal. 4:4), and to say any less of him was equivalent to Apollinarianism [the heresy in which Jesus’ human mind was replaced by the divine Logos]. (13-14)

It’s worth pointing out how much of a radical Julian was on this topic during his day. As Clark points out, Augustine had taken a middle ground on the question of the virginity of Jesus’ parents. Although he did not believe Mary ever had sex, he did argue Mary and Joseph had a real marriage, contra Jerome, who believed Joseph was a guardian, not a husband, to Mary. Julian finds Augustine’s position ridiculous: Without sexual consummation, Mary and Joseph could not be considered married, yet the Bible clearly describes them as husband and wife.

Regardless, Julian seems to have a much better understanding of genetics than Augustine. The virgin birth is irrelevant; how could Jesus be fully human if he did not inherit the fullness of human nature? Barclift helpfully charts out Julian’s arguments on pp. 16-17:

So this becomes problematic, because we know that everyone sins. Julian’s first two points are sound: How can humanity be genetically stained with original sin and Jesus be completely sinless at the same time? This is a cogent and convincing argument that has only grown more so as our knowledge of genetics and biology has grown.

Julian’s conclusion from this argument – that humans are born without sin – isn’t necessarily wrong, but it leads him to argue an idealistic notion of human experience, in which sin is not, as Barclift summarizes, “that powerful monster within each one of us warring with the mind for control of our senses, but … a sequence of wholly independent and uncorrelated decisions, a logical contradiction of one’s reason. Each decision to sin remains autonomous and undetermined even by its own choosing. It is an isolated action one could easily avoid” (18).

Well, that’s probably a little ridiculous, as it’s completely contrary to our experience of the insidious, addictive nature of evil. Julian draws the wrong conclusion from his arguments. Rather than simply call for a more optimistic – realistic, I would argue – view of human nature and sexuality, Julian winds up mirroring Augustine’s extremism.

Rather, Julian’s argument that Jesus must have fully experienced human nature – after all, he was tempted “in every way” like we are, according to Hebrews 4:15 – lends itself to acknowledge this possibility: that Jesus was in fact capable of sinning, even if his divine nature ultimately kept him from doing so. The rest of us, not being also fully God in addition to our humanity, do not have such good fortune, and we often fall prey to the power of evil, which attacks from without and within, but does not need genetic help to do so.

What would the Christian tradition look like if Julian’s arguments against original sin, and in favor of the inherent goodness of human nature and sexuality, had carried the day? Of course, we’ll never know for sure. Julian was not alone in arguing such goodness; we’ve spoken about Gregory of Nyssa and others who saw the goodness inherent in each of us as being so strong that it ultimately will overcome all evil and lead to the universal reconciliation of humanity. But those traditions were largely subsumed into the juggernaut that was the influence of Augustine on Western Christianity – an influence that stained human nature with the taint of inherent sinfulness rather than inherent goodness and smeared sexuality as the purveyor of death rather than life.

Thankfully, Augustine preserved the arguments of Julian well enough that we can go back and recover from him and others a Christianity that more accurately reflects the goodness of God’s creation.

5 thoughts on “What If Julian of Eclanum Had Beaten Augustine?”