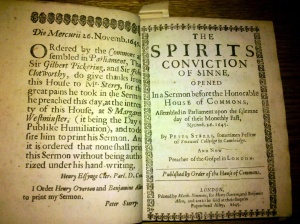 At first blush, it’s hard to think of two more opposite approaches to God, sin and judgment than Calvinism and universalism. Calvinism is all wrathful, while universalism is all cuddly. In universalism, God saves everyone from hell; in Calvinism he predestines most people to it.

In the previous chapters of “All Shall Be Well,” we saw how Greek philosophy, Christian mysticism and meditation on the nature of God combined to produce a “minority report” of universal salvation rather than the more widely assumed doctrine of eternal conscious torment in hell.

With the dominance of Augustine and Aquinas, however, universalism all but disappeared from the conversation until the Protestant Reformation, which democratized scripture reading and interpretation. Not surprising, it didn’t take much more than a century for universal restoration to return as an alternative to the dominant eschatological assumptions of the church.

Louise Hickman, in her essay “Love Is All and God Is Love: Universalism in Peter Sterry (1613-1672) and Jeremiah White (1630-1707),” also points to England’s move toward less censorship and freer discourse in the mid 1600s as a contributing factor to the dissemination of “many unorthodox and sometimes eccentric theological views” and “an atmosphere of increasing tolerance and debate.” As a result, universalism was more popular than ever by 1700.

That said, for prominent members of the church, universalism remained a dangerous proposition, so Peter Sterry and Jeremiah White – both men chaplains to Oliver Cromwell – published their works on universalism (That the State of Wicked Men after This Life Is Mixt of Evill, & Good Things by Sterry in the mid 1680s, and The Restoration of All Things by White in 1712) posthumously (well, someone else published them, but you know what I mean).

The men were influenced by a group called the Cambridge Platonists, a group of philosophers who resurrected the notions and conclusions of neo-Platonic philosophy – which also undergirded the assumptions of early Christian universalists like Origen and Gregory of Nyssa. And of course they influenced each other, the elder Sterry especially the younger White.

But whereas Origen came to universalism through his belief in the preexistence of souls and Gregory through his musings on the goodness of God, Sterry and White blazed a new trail: the overwhelming love of God.

The root of their universalism is the shared insistence that [God’s] love should know no limits, and embrace all. Both thinkers recognized the fact that any debate about the eternity (or not) of hell is more fundamentally a debate about the extent of God’s love.

White’s argument is in fact quite similar to Nyssa’s, except with the focus on love rather than goodness. Hickman summarizes his thought: “God’s works are simply different ‘modes’ of divine love, and love is the most fundamental attribute by which all of the other divine attributes must be understood, including justice and power.” God’s justice and punishment must evidence his love, in other words, and “those who argue for eternal punishment on the grounds of justice have misunderstood the nature of God” (98).

This flies in the face of centuries of Calvinism, especially that strain expressed by neoreformers such as John Piper, who has pointed to the love-justice dichotomy as a reason for varying views of God. White and Sterry seem to agree that such a dichotomy exists, and they emphatically reject the prioritization of justice over love, which “leads to a perversion of the understanding of divine nature. … Too much emphasis on God’s justice will bring into question the goodness of God” (99).

Rather, true justice would be the eradication of the evil that afflicts humanity not the continuing infliction of evil for all of eternity. White and Sterry were influenced by the movement of their day that saw punishment less as retributive and more as reformative – a movement that has continued in fits and starts to the present. If God’s punishment is truly just, then it must be restorative, the men argued, not simply retributive, and this fundamentally changes the character and quality of hell. Punishment becomes more internal, or as Hickman writes, “Hell involves a little less being eaten alive by worms and a little more being eaten up by a guilty conscience” (101).

So while the men’s views on God’s love, goodness and justice required a radically different conception of hell and punishment, it was actually Calvinism that provided the structure for their universalism.

To be sure, Sterry and White were not Calvinists; the men found abhorrent its teaching that God predestined people to hell. Such a notion shreds the possibility of God’s goodness, and while Calvinists pointed to the sovereignty of God, in what has become a common refrain for universalists, Sterry and White argued that if goodness is to have any meaning for humanity, it must be reflected in the nature and actions of God. As Hickman summarizes:

The nature of goodness is eternal, it is part of God’s very nature, and this means that God could not turn good to evil by an act of will. God’s will is not arbitrary but is the highest law of all wisdom and goodness, and so vindictive eternal punishment will never be morally good.

Yet Sterry and White also found free-will Arminianism, in which humans go to hell because of their own choices rather than God’s, unpalatable because it allowed humanity to defeat the goodness of God. So in the end, Sterry and White embraced predestination, after all. “In order to be a universalist,” Hickman writes, “it seems that a commitment to some form of ‘predestination’ is necessary; God’s love cannot fail in the end.”

And here we see Calvinism and universalism as opposite sides of the same coin; both theological systems prioritize the sovereignty and power of God, yet the universalists Sterry and White saw that power through the lens of love and goodness, which required the salvation of all humanity.

This also fit with the Platonist notion that all good things emanate from the ultimate Good and desire at some level to return to It.

What this means for Sterry’s reformist conception of hell is that although we may have no choice in being refined in hell’s purifying fires, it is a choice we will come to realize in the end that we actually want. It essentially echoes the Pauline theology that it is sin that makes us slaves; becoming a slave to righteousness will grant us our freedom. (107)

Sterry’s God is not a detached observer predetermining events but has an intimate knowledge of a creation that emanates from God’s very Being. The neo-Platonic idea of emanation means that, for both Sterry and White, the end is as certain as the beginning: love and goodness emanate to the end and this cannot be otherwise. Universalism is in this sense predestined because of the power of love. Or as White put it: It is certain that sin and death shall not be the end, “for Grace is the beginning of all; and the end must be the same thing.” (108)