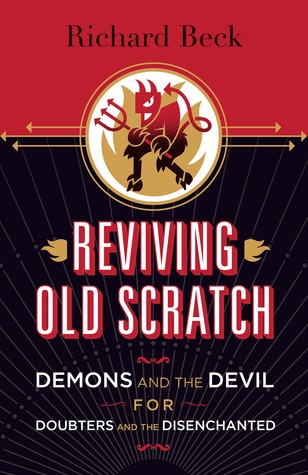 Originally posted to Facebook on Sept. 21, 2016. It has only suffered minor edits in transplanting it here.

I just finished reading Richard Beck’s Reviving Old Scratch, a book about the devil and spiritual warfare for people who question, if not totally reject, literal notions of demons and angels.

It cautions against overpoliticizing and over-metaphorizing those concepts because the Bible talks about them not just in relation to political power, but also to internal moral struggles found within each person. Fighting for social justice is spiritual warfare, but so too is loving others – emptying yourself for them, fighting daily against the fear of death and the fear of loss and the love of money and country and possessions that militate against radical, sacrificing love. Lots of food for thought in that book, for those who believe in a literal Satan, and for those who don’t.

Beck believes we should recover a language of the demonic, understanding that powers greater than humanity do indeed ensnare us. Call them what you will, but Nazism, Stalinism, systems of fascism and totalitarianism and apartheid are demonic. More, they are demons that burrow into the fabrics of societies and require active struggle, both collective and individual, to defeat and defang.

Our society, more than at any point in the past 50 years, is actively doing battle against the demon of Racism.

It’s a demon born to justify the much older demon of Slavery; together, they were carried aboard ships across the Atlantic. They planted deep roots in America’s urban centers and in southern labor camps. They joined with the demons of Materialism and Consumerism to build an economy unrivaled in the world. Together, they unseated whole nations, destroyed families, murdered millions. A physical war was required to break the partnership and loosen the hold of Slavery on our society. But Racism persisted. It persists. It is weaker than it was, but it is wilier. When Martin and Malcolm and Stokely and others helped to cast it out of our laws, it sank deeper into our cultures. It wrapped itself in a flag and called itself Heritage.